Although my yearlong sabbatical is all about reinvigorating my scholarly life, periodically I have a few administrative duties that call, forcing me out of my flip-flops and reluctantly into a business suit. One of those duties is going on schools of journalism site accreditation visits. I sit on the national ACEJMC Accreditation Council, the group of academics and professionals who oversee accreditation for our J-Schools so I didn’t think it was right for me to bow out of visits this year.

Going on these visits while on sabbatical is a different beast altogether. It’s a bit jarring. First, you receive a ginormous box of reading material that the unit sends to convince the accrediting team that it’s at the top of its game. Then you have to get on a plane and travel to the school for three days of intense inspection and report writing. For some reason, I always seem to get the cold schools so I leave the comforts of the south and head into weather. Always.

This visit was no different. I arrived at Kent State University just in time for a snowstorm. My husband thought it would be helpful to text me a picture of the weather report while I was gone. A balmy 70 degrees at the beach. 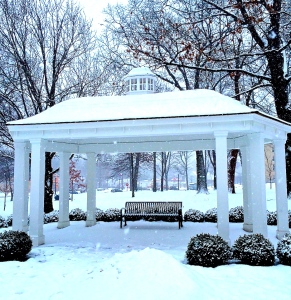 Part of the beautiful (but snowy) Kent State University

I was the only non-administrator on the recent visit. All the other team members know me as a fellow administrator so I had to remind them a few times that that wasn’t my life any longer. My fellow teammates had to have conference calls back at their universities, had to keep up with emails, had to check in with their administrative assistants. They were giving close attention to our task at hand—but they had to keep one eye on things at home.

I did not. In fact, I hardly even know what’s happening at my own university these days. It’s taken me a number of months to unplug from (most of) the academic gossip, but I am deep, deep, deep into life now as a sabbatican (I think I’ve made up that word; don’t you think it should be accepted into the lexicon?). As I’ve written before, one of the frustrating things for me as an administrator was the amount of space it took up in my brain. But now, as a regular professor, I can think long, deep thoughts without interruption.

On the plane out to Ohio, I sat with the accreditation self study, reviewing the report again making sure I would be ready to hit the ground running when I got there (of course, there was no real running since I had to do everything I could to stay upright on the slippery sidewalks).

On the plane out of Ohio, I sat hunkered over, huddled with my most recently purchased stats book. I was determined to get to the end of this multivariate conundrum.

George Bernard Shaw once said, “It is the mark of a truly intelligent person to be moved by statistics.” Who knows if that is true, but I’d like to think it is. I’ll tell you. I nearly cried when I finally got the model to run and watched all those beautiful statistical significant results scroll down my computer. Hey, I’m a numbers nerd. And that makes me happy.

I'm a professor of Journalism and Mass Communications at the University of South Carolina. I am passionate about rowing, I'm mostly scared about sailing (but I'm competent), I love to cook when I don't have to, and I have some fairly strong opinions about journalism education.

6 thoughts on “I Just Got a Big Dose of Administration—and I Was Ready to Run Pell-Mell Back Home to Curl up with my Statistics Book!”

Hey, Thanks for Taking a Look

I had to cancel my next trip to Italy. I’m sad! Hoping for Feb!

Here’s What I’m Writing About