As you all know, the hubster and I recently travelled through France and Italy to celebrate our 40th anniversary.  You all also know that I had put so much planning, hope, and expectations on this trip that some people (okay, my husband) was concerned I might be disappointed.  I mean what trip could possibly live up to a vacation I had spent untold hours thinking about, rethinking about, and then thinking about again?  Those of you who know me well, know that I have a vivid imagination.  Believe me, there was not one inch of this trip that I didn’t think about (multiple times) before we left.

So, how was it?  In a word, Epic.  I mean utterly, truly, unbelievably epic.  It was what I had hoped it would be.  And then some.

I could point to any number of reasons it was so magical.  Spending a month with the best guy ever would be one reason.  Being out in the middle of the ocean for two weeks would be another.  Breath-taking scenery everywhere we turned would be yet another.

The ship hadn’t even left port and I was already relaxed!

But, eating the food was a highlight that was so delightful, it’s difficult to describe.  Simply put, I ate with gusto on this trip. And, I ate a lot.  In fact, I am positive that I ate more in one month than I have eaten over the entire past year.  One night, for example, we decided to take a break from our normal four-course meal at our agritourismo.  We walked into town for a “light” dinner.  This breezy dinner consisted of a pizza for each of us (Do the math.  That’s two pizzas.), a scoop of gelato (I think on that night I had Nutella and Cream, if you can imagine) and a carafe of wine.  And, just for the record, that entire meal cost about 25 euro. 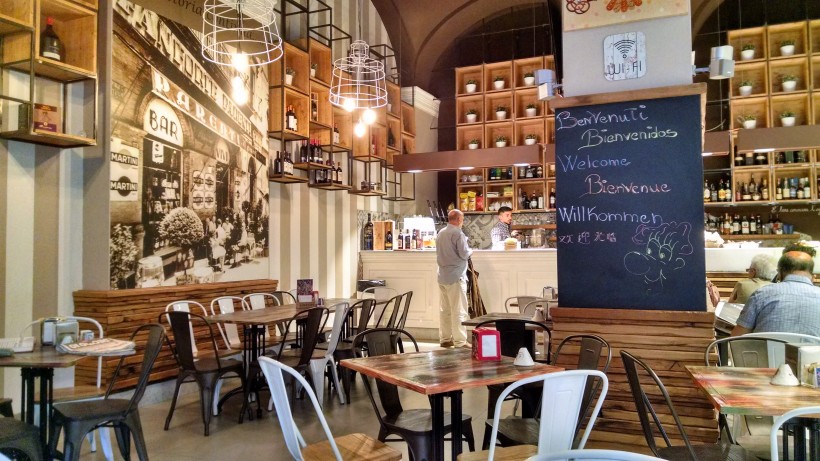 This is the restaurant where we had a “light” dinner of pizza, gelato, and wine.

In Italy, if a pasta dish were available (and in Italy, pasta is always available!), I ate it.  Formaggio?  Oh, si, grazie!  Coupled with a delightful (and crazy cheap) local wine, I was happy.

My lunch in Cortona. And, yes, I ate every bite.

It didn’t stop there.  We ate dessert with just about every meal, which, if you knew my husband (since he doesn’t like sugar), is amazing. At one restaurant, we even shared three desserts, each one yummier than the one before.

My achalasia was clearly on vacation.

I first started noticing that I was eating easily during our transatlantic cruise. While you hear stories of people piling their plates at the buffet with bacon (yes, I did see people eat way too much bacon in one sitting), waffles, and everything else they could grab, there were wonderful healthy choices that were truly mouthwatering.  Oatmeal for breakfast, exotic soup for lunch (and usually ice cream afterwards), salmon and vegetables for dinner.  I loved the food on the ship and ate it with joy.  I was relaxed and breathed deeply while sitting on our balcony.  Over the two-week cruise, I only had to pause and consider whether I could continue to eat (usually the answer was yes!) just a few times.

In Italy, I only had one semi-major constriction of my esophagus and I wasn’t even eating then.  It was while driving on a mountainous, supposedly two-lane road with 180-degree hairpin turns about every two minutes. I think anyone fearing a heart attack would be justified at that moment.

Before our trip, I considered whether I needed to worry about gaining weight over the month. After all, the only good thing about achalasia was that I was able to shed my excess weight.  What if it came back? I even brought a pair of my old-size pants just in case I wouldn’t be able to fit into my new-size clothes by the end of vacation.  I finally concluded that if I found I could eat, I wasn’t going to worry (much!) and that gaining up to 10 pounds would be acceptable and well worth the price for eating fabulous food.

But I didn’t gain weight.  Not even a pound.

I have no explanation for this.  Perhaps I ate less than I thought.  (Even if true, I’ve got pictures of the entire pizzas I devoured so I know I ate a lot.)  Perhaps exercise kept the extra weight away (Yes, we walked a lot, but I don’t think it would be possible to walk enough to keep the “calories in/calories out” equation even partially balanced.). Perhaps I only ate good-for-you food.  That was mostly true, but a big bowl of pasta has some serious calories, no matter which way you count them.  And, as for the 5 oz. of wine per day is good for you medical recommendation, yes, well…

Just taking a rest before gearing up for a four-course dinner.

I think it was a miracle. A full-blown “hey, I’m going to give the girl a break just because I can” kind of miracle.  A challenging year of barely eating ended with a flat-out celebration of the goodness of food.  Ecclesiastes 7:14 begins “In the day of prosperity be joyful, and in the day of adversity consider: God has made the one as well as the other.” I’ve had a bit of adversity—not much compared to others, but I’ve shed a few tears—and from May 6 to June 6, I had joy.  Complete freedom to eat without worry.

Since we’ve been back, I continue to do well, but I certainly can’t eat the way I ate on vacation.  I’m back to thinking carefully about my food, paying attention to the pains, drinking plenty of hot water when I get into trouble.  In short, I have nearly daily reminders that I still have achalasia and I always will.

But, that’s okay.  I got a glimpse of joy.  My favorite author, C.S. Lewis, once wrote, “I think that all things, in their way, reflect heavenly truth, the imagination not least.”  I might be stretching here, but I think I got a glimpse of a sliver of heaven on this trip. And it looks a lot like Tuscany.

I'm a professor of Journalism and Mass Communications at the University of South Carolina. I am passionate about rowing, I'm mostly scared about sailing (but I'm competent), I love to cook when I don't have to, and I have some fairly strong opinions about journalism education.

4 thoughts on “When Achalasia Takes Vacation”

Hey, Thanks for Taking a Look

I had to cancel my next trip to Italy. I’m sad! Hoping for Feb!

Here’s What I’m Writing About